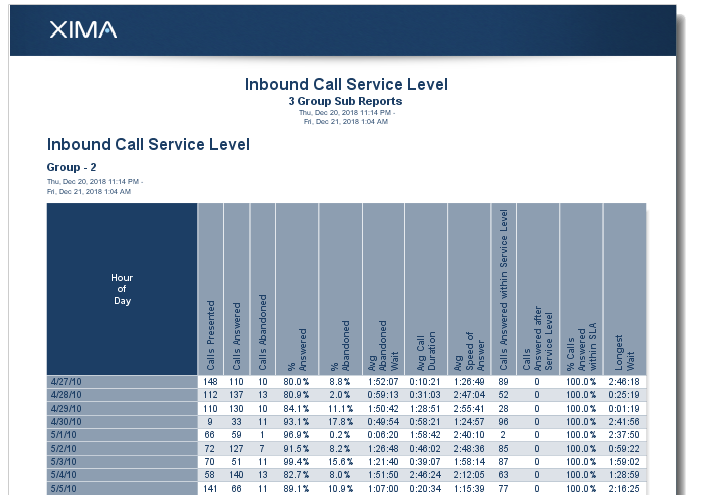 Shows the total number of calls in which the specified group was involved in at least one ringing or queue event, meaning the group had a chance to participate in the call. By default, this column will only include inbound calls, *but it can be set to include other call directions.

*To set to include other call directions, you need the Custom Reports module.

This shows the total number of inbound calls associated with the given group that contained at least one talking event. These are calls that were handled by a live agent.

An abandoned call is an inbound call that does not end in a talking or voicemail event. This could be any call ending in a hold event, queue event, ringing event, park event, etc.

This shows the total percent of calls answered, meaning that the calls contained at least one talking event. This is calculated by dividing answered calls by presented calls, and is then displayed as a percent.

This shows the total percent of calls abandoned, meaning that the call ended in something other than a talking or voicemail event. This is calculated by dividing abandoned calls by presented calls, and is then displayed as a percent.

Shows the average duration that the caller waited in the final event (queue, hold, park, ringing, or transfer hold) before they abandoned the call

Shows the average duration of all calls involving the specified group

This shows the average duration of the ringing and queue events associated with the group or the agents in the group before the call's first talking event.

The Service Level typically refers to the speed of answer which is measured by how long the call was in a ringing event before the call was answered.

You can specify your desired Service Level when selecting the parameters for the report.

This shows the total duration of the call with the longest wait time before being answered, meaning the call sat in a ringing event longer than others.